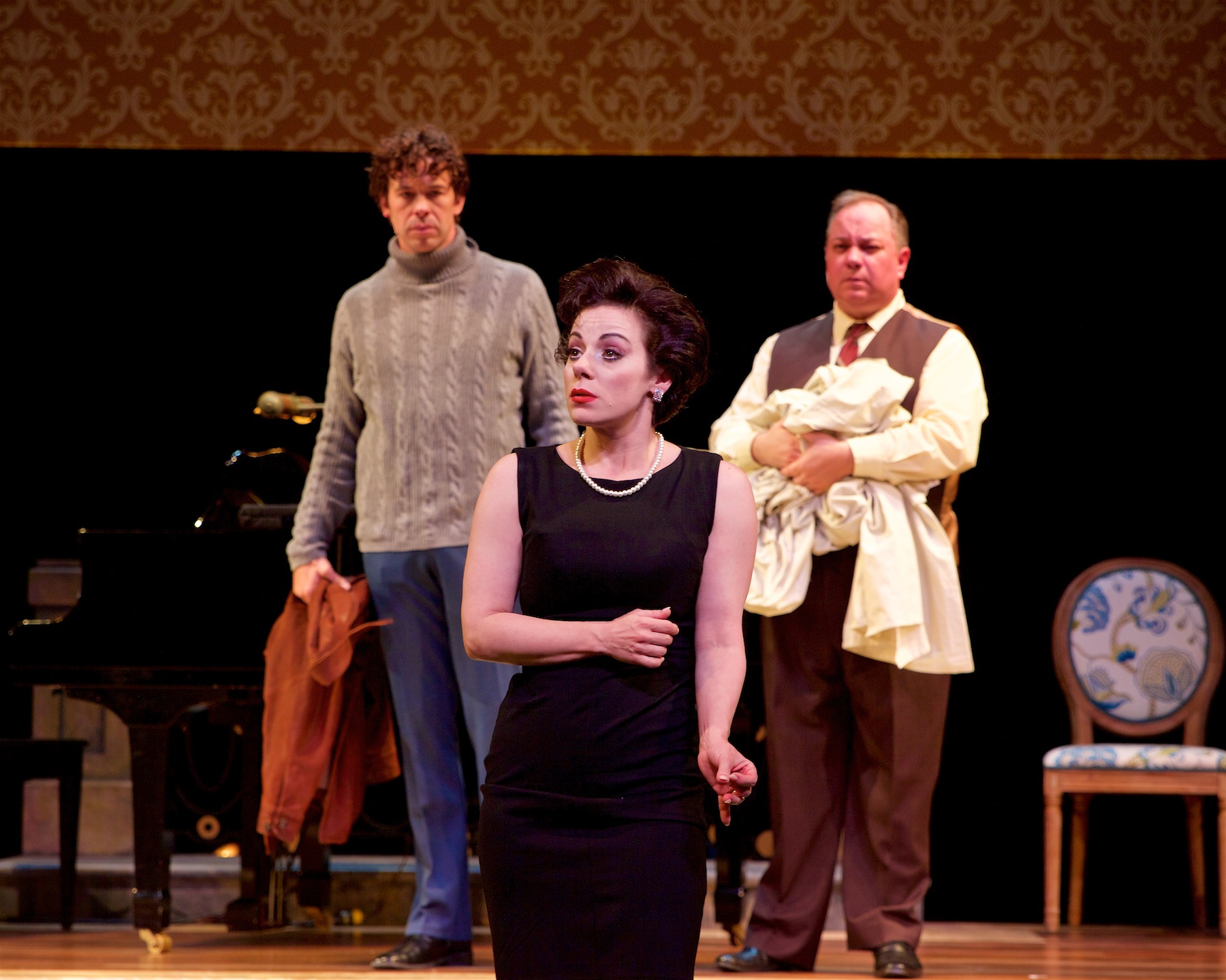 Throughout her life, and since her untimely death at age 47 in June 1969, there has been an unceasing mythology surrounding Judy Garland, whose face and recognizable voice are forever immortalized. But, the price that Garland had to pay for such immortality was a life of inner-turmoil and terror, reinforced by the apparatus of her fame, including those closest to her. 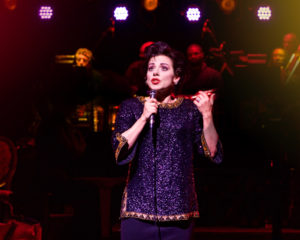 Angela Ingersoll stars as Judy Garland in the La Mirada Theatre for the Performing Arts/McCoy Rigby Entertainment Production of “End of the Rainbow.” Photo courtesy of Jason Niedle

Garland, who is renowned for both her robust vocals, and for starring in “The Wizard of Oz,” “Meet Me in St. Louis,” “A Star is Born,” “The Harvey Girls,” and an assortment of films with Gene Kelly and Mickey Rooney, wanted a way out from the pomp and fanfare. She desperately wanted to say goodbye to the simulacrum of “Judy Garland,” in order to live freely with her fifth husband, Mickey Deans. Sadly, this was not to be for the angelic girl who became a woman too soon, enslaved by an adolescent-onset drug addiction abetted by her own mother.

In adulthood, Garland’s dependency on pills and alcohol became an ingrained habit that numbed the pain of a reluctant celebrity existence despite a vicious cycle that proved to be too much to overcome. Written by Peter Quilter, the powerful and poignant “End of the Rainbow,” a co-production of the La Mirada Theatre for the Performing Arts (where it is playing through November 12th) and McCoy Rigby Productions, thus details Garland’s final months at The Ritz Hotel in London, England, amid a five-week residency at “The Talk of the Town” nightclub. The immersive set design by Stephen Gifford and the authentic-looking costumes by Bill Morey frame a sobering story of an embattled and distressed addict, who (paradoxically) yearns for her drugs, yet has a wistful desire to be protected from herself, until she unfortunately isn’t anymore.

Wonderfully directed by Michael Matthews, whose pace ensures the emotional punctuation of each scene, “End of the Rainbow” stars the astonishing Angela Ingersoll as Garland; Jon Steinhagen as her pianist and fiercely loyal confidant, Anthony; Zachary Ford as Mickey Deans, Garland’s fiancée and manager; and Brian Wallace as a BBC radio interviewer, whose character represents the press’ fascinating relationship with the superstar.

As uncanny as Angela Ingersoll is as Garland, while giving the part her own personal stamp, it is the meaningful message she imparts that supersedes everything else. Having earned the respect of Garland’s son, Joey Luft, Ingersoll does more than just pay her respects to Garland’s memory with resounding renditions of “I Can’t Give You Anything but Love, Baby,” “Just in Time,” “The Trolley Song,” “Get Happy,” and “For Me and My Gal;” she brings much-needed awareness to the very human struggle of the towering icon. Ingersoll is searingly realistic as a big ball of energy in a petite body, evincing Garland’s maladaptive ways, including, but not limited to, her irascibility, contriving the threat of her suicide as a negotiating ploy for settling an unpaid hotel debt, and manically begging for just one more pill of Ritalin. 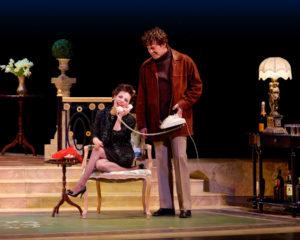 Angela Ingersoll and Zachary Ford in the La Mirada Theatre for the Performing Arts/McCoy Rigby Entertainment Production of “End of the Rainbow” by Peter Quilter. Photo courtesy of Jason Niedle

It terribly sad to see, especially when Garland swallows an entire vial of dog mange pills, and then gets on all fours, barking like the animal. The irony is that this scene elicits laughter (though the players are self-aware of this), not only from Anthony and Mickey, but from the audience. Perhaps it’s our way of coping with an unduly disturbing sight, to see a hero reduced to a caricature, but what Garland needed, and wanted, was tough love. To laugh at or even with her was, like Pavlov’s dogs, a way of rewarding bad behavior. Suffice it to say, Ingersoll’s performance takes this crucial factor into consideration, because through every one of Garland’s emotional meltdowns, and particularly during “You Made Me Love You (I Didn’t Want to Do It”), and “The Man That Got Away,” there is a heartbreaking helplessness affixed to the words, which Ingersoll agonizingly emotes. “Over the Rainbow,” too, takes on a deeper substance echoing Garland’s harrowing life, with Ingersoll plaintively on her knees, arms stretched to the sky, channeling the international darling, who regrettably never reached her full potential. When the classic song movingly ends on “…why, oh why, can’t I?”, with Ingersoll’s sustained, goosebumps-inducing note to finish, we aren’t thinking of “The Wizard of Oz” anymore, but rather the tragedy that was Garland’s unfinished journey.

The press corps, most of whom were not especially informed of Garland’s issues, as the media would be today, mostly gave her the benefit of the doubt, and looked away if necessary. Brian Wallace, who plays a pleasant radio interviewer, represents how most of us would react if we witnessed one of our idols acting strangely and erratically on the air, which Ingersoll perfectly gets across.

Jon Steinhagen, who is additionally the show’s music director, skilfully fills the shoes of Anthony — Garland’s British pianist. In an interesting life imitates art parallel, Steinhagen legitimately plays every key on the piano, and, when he isn’t being the outstanding accompanist, offers a keen comic timing as his persona in the form of harmless quips. While they lighten the production’s intense and pervasive anguish, it is the sweetness and forgiving nature that Steinhagen embodies his role, which underlies his unconditional love for Ingersoll’s Garland, and as a result makes their scenes very special. One of these is when Anthony, who, with his notably dulcet English accent, is cheering up and simultaneously applying makeup to Garland, who is way behind schedule for her own concert. A simple exchange becomes memorable because Steinhagen evokes a special tenderness that makes his character’s counsel about how “we’re all pretending to be adults” a very comfortingly relatable sentiment. 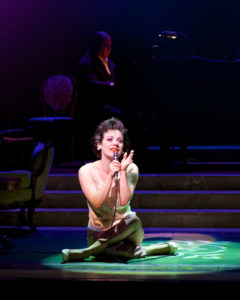 Angela Ingersoll stars as Judy Garland in the La Mirada Theatre for the Performing Arts/McCoy Rigby Entertainment Production of “End of the Rainbow” by Peter Quilter. Photo courtesy of Jason Niedle

Zachary Ford is Mickey Deans, Garland’s husband of only three months. Deans is doubtlessly in an unenviable position, bearing the taxing burden of Garland’s diatribes and tantrums. She knows full well that her actions are wrong, and so she pleadingly asks him to not give up on the hope of her improvement, in spite of her stubborn belligerence. Their relationship is characterized as a tug-o-war, and Ford’s performance communicates this frustration with a festering palpability.

Initially, Deans is driven to do what’s right by hiding Garland’s pills, not to mention smoothing things over with the public when his lover gets out of hand. However, the inherent conflict of interest of being both Garland’s romantic partner and manager comes to a head when Deans is compelled to hedge against his financial losses by using drugs as a carrot to lead Garland back to the stage floor against her begging refusal. It is a devastating change of heart, as Deans takes the path of least resistance, going from Garland’s guardian to her Grim Reaper in one fell swoop. Certainly, we can’t blame Deans entirely for his decision to save himself – and Ford’s facial expressions clearly denote this dilemma – but we can find him culpable for the method he chose to do so, which led his betrothed down the path of no return.

Worthy of the highest recommendation, Peter Quilter’s “End of the Rainbow” is the humanizing account of Judy Garland’s mournful exit from the spotlight that, as dismaying as it is at times to watch, simply had to be told. Joined by a first-rate cast in this revival, Michael Matthews directs with a delicate hand and a perspicacious eye, respectful of Garland and her legacy. And, more than just regale its audience, the play, or quasi musical, responsibly relays how debilitating drug addiction is to even the larger-than-life individuals who we thought, or wished, would be immune to such disastrous consequences.

For more information, and to purchase tickets to “End of the Rainbow” at the La Mirada Theatre in La Mirada, CA, please visit lamiradatheatre.com

Related Items:1968, A Star is Born, Angela Ingersoll, Anthony, Be Myself, Brian Wallace, Come Rain or Come Shine, drama, drug addiction, featured, For Me and My Gal, Gene Kelly, Get Happy, I Can't Give You Anything But Love Baby, Jon Steinhagen, Judy Garland, Judy Garland's death, Just in Time, La Mirada Theatre, La Mirada Theatre for the Performing Arts, Liza Minnelli, London, McCoy Rigby Entertainment, Mickey Deans, Mickey Rooney, musical, Over the Rainbow, Peter Quilter, pill addiction, play, shows to see in Southern California, shows to watch, Summer Stock, The Harvey Girls, The Man that Got Away, The Ritz Hotel, The Talk of the Town, The Trolley Song, The Wizard of Oz, When You're Smiling, You Made Me Love You (I Didn't Want to do it), Zachary Ford
Share
Tweet
Share
Share
Email 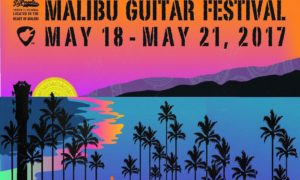 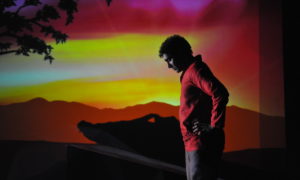 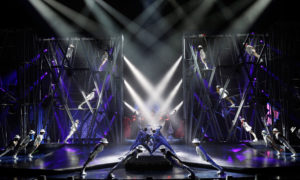 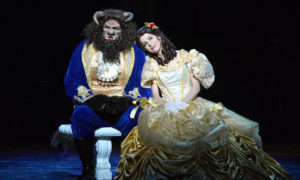 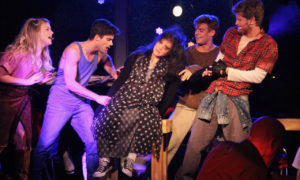 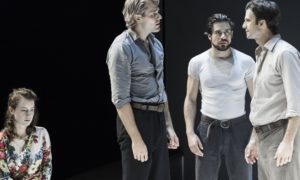 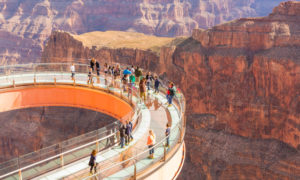 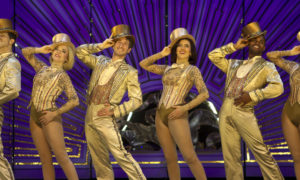 “Feathers of Fire: A Persian Epic” is Poetically Enchanting
LA Opera’s “Nabucco” Invigorates the Spirit with the Gift of Humility
To Top